Portland Island.  Formerly Princess Margaret Provincial Marine Park.  Open all year, picnic and campsites, toilets, no other facilities.  Dogs must be on a leash and cleaned up after.  In honour of her last visit to Victoria, Portland Island was donated to Her Royal Highness Princess Margaret, who later deeded the island to BC.   The park is now part of the Gulf Islands National Park Reserve.

Portland Island is wooded and hilly.  Hiking trails follow the coastline.  Easy-walking service roads and trails crisscross the center of the island.  It would be easy to spend an entire day exploring.   Reader Tyson Nevil says the coastline trail is easier to follow when walking in a counter-clockwise direction.

Anchor in Royal Cove (behind Chads Island) on the north side of the island, or in Princess Bay, behind Tortoise Island on the south side.  The Royal Cove anchorage is exposed to the wakes of passing BC ferries, and Princess Bay also gets wakes.  At Royal Cove, you can have a quiet night if you can get well inside.   Poorly marked stern-tie rings are along the high tide line in Royal Cove. 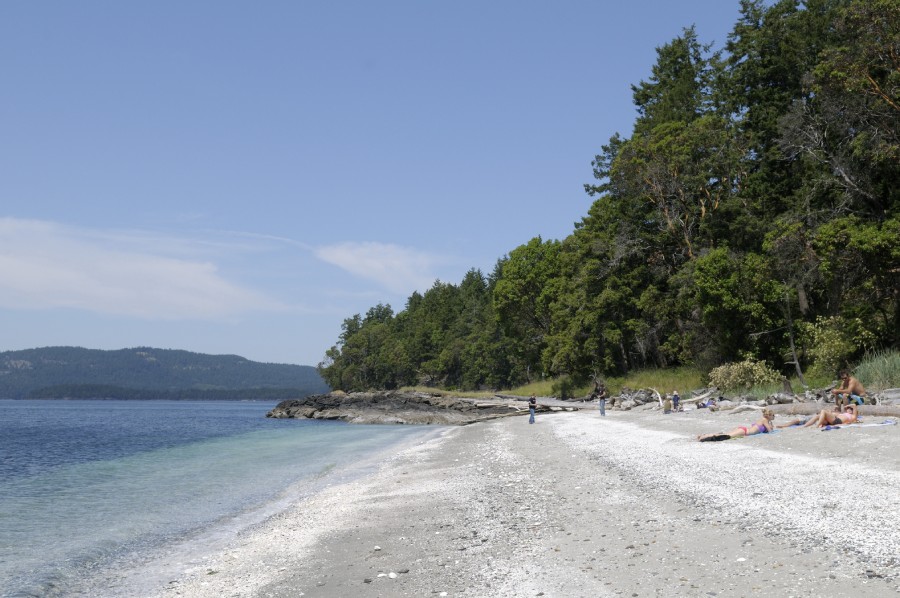 Princess Bay is roomier and far more popular, but somewhat exposed to southerly winds.  Ins summer it’s usually fine.  With its shallow depts, not much anchor rode need be paid out, and the boats squeeze in pretty tightly.  Watch your depths as you approach the head of Princess Bay.  The boom shoals rapidly, farther from more than you might expect.  Dinghy docks in Royal Cove and Princess Bay provide shore access.

The host float in Princess Bay is staffed by yacht club volunteers during the summer.  They answer questions and give out information.

The G.B. Church, a sunken freighter off the southwest shore of the island, is an artificial reef for divers.  The freighter lies in 100 feet and is marked with bow and stern buoys.

For more information visit our partner site Waggoner Cruising Guide.   For all your yacht provisioning and marina, reservations call our main desk at 778-432-0477.   If you’re looking for a superyacht marina we accept 65′ to 180′ vessels.  Phone or book online to reserve your slip or book the ultimate yacht Rendezvous.